Amalfi Coast called “Divine Coast”  is on the UNESCO list of The World Heritage Collection.

The Amalfi coast is an area of great physical beauty and natural diversity. It has been intensively settled by human communities since the early Middle Ages. There are a number of towns such as Amalfi and Ravello with architectural and artistic works of great significance. 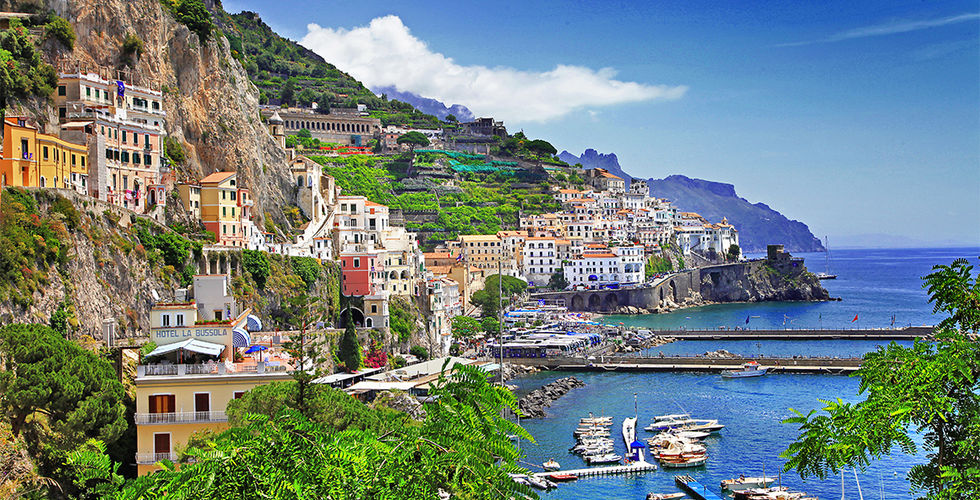 The Royal Palace, the symbol of Caserta and a UNESCO World Heritage Site,  was designed in the 18th Century by the architect Luigi Vanvitelli, according to the will of Charles III, Duke of Bourbon.

UNESCO and Italy have agreed to collaborate on the restoration of the Archaeological Areas of Pompeii.  Once a thriving and sophisticated Roman city, Pompeii was buried under meters of ash and pumice after the catastrophic eruption of Mount Vesuvius in 79 A.D. The preserved site features excavated ruins of streets and houses that visitors can freely explore.

From the Neapolis founded by Greek settlers in 470 B.C. to the city of today, Naples has retained the imprint of the successive cultures that emerged in Europe and the Mediterranean basin. This makes it a unique site, with a wealth of outstanding monuments. The historic centre of Napels is a UNESCO World Heritage Site. The Cathedral, Castel Nuovo, The Catacombs of San Gaudioso, The Museum Capodimonte and The Royal Palace are just some of the sites we will visit.